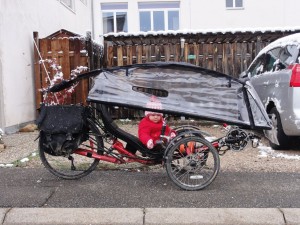 The trike I bought (second-hand) was already equipped with a Veltop “1st generation”. After a bit more than a year and several uses, it came out that this product had quite some disadvantages – given the fact it was very well doing what you ask it to do first, i.e. protect against rain.

1. visibility problems on the windshield : with car-lights coming from the opposite direction, or with the sun in front of you close to the horizon, especially with (but also without) rain drops, you could be well dazzled. In quite some occasions, this was quite dangerous. Also in the winter time, I had sometimes to stop ca. 5 times on one-way just to clear the frost (even without the Veltop itself, the windshield is always fixed). 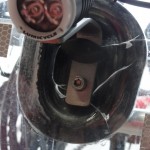 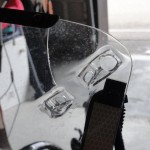 2. the plastic windshield was cracked on the mounting supports (see 2nd picture), I guess because of the overall little torsion you may have when mounted, kind of forcing on these two screws. Also cracked on the top (see 3rd picture)

3. visibility on the sides quite diminished, because of the side protections going quite low (see 4th picture), especially in the dark.

As I was not sure how long it would last with the cracks and because of the visibility problems on the windshield, I bought the Veltop “2nd generation” – and must admit it solves all of these problems. I am not paied by the vendor to say it and love all the improvements. These guys have for sure tested their product, listened to customers, and made all the improvements you could think of in this new product. 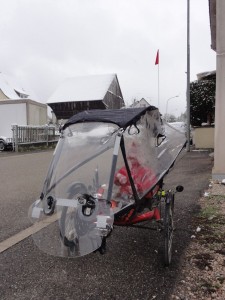 More on it on the “Veltop II” page… and maybe some drawbacks after using it a while ? Let’s see…