Home   /   about my bike commuting

about my bike commuting

It all started when we moved to a new location in 2011 (close to Basel, Switzerland). We then decided not to buy a 2nd car, as a “what-did-you-Dad-do-about-all-that-stuff-you-heard-about-climate-change?” action. This is how my bike commuting started… (Well, my “real” bike commute, as I already used quite a lot my bike before, also to go to work, but it was only 15 minutes one way, in the town). 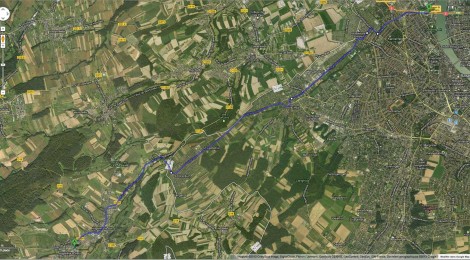 My bike commute is shown on the map below (click to enlarge), 12.5 km one way. It takes me about 31 minutes for A>B, and about 37 minutes from B>A. When going from A to B, after ca. 3 km, I turn right into the (nice village of) Schönenbuch, just to avoid more of the D12B, where there is quite some trafic in the morning / evening. And a few bad curves where the visibility is not that good when driving a bit fast and not expecting such a vehicule on the road.

I heard the other day about a project for a bike lane between Hagenthal-le-Haut and Hégenheim… Waouh… let’s start dreaming. But I heard another day, also, that this project had been around for SO many years… well… guys, isn’t it time to make an action now, as this becomes trendy to promote cycling ?