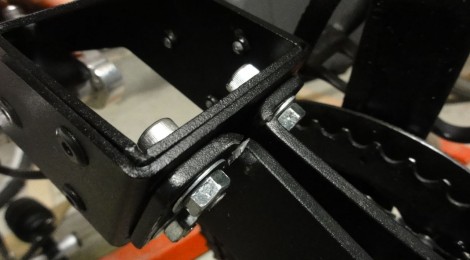 Second breakdown – almost : part of the front support of my Veltop was going to completely break (see the two somehow inverted “L”-shaped parts in the picture). I guess that with all the vibrations and the weight of the windshield, with time, it was a weak point of the set-up. Probably, as when checking with Cyclo-System, they told me I could re-order that spare part, but that it was replaced in the meantime (I bought it 2 years ago) by a new one. It looks lighter, more robust and better designed.

So I ordered that new one instead of the same old one. Will see how it fits, also in time.