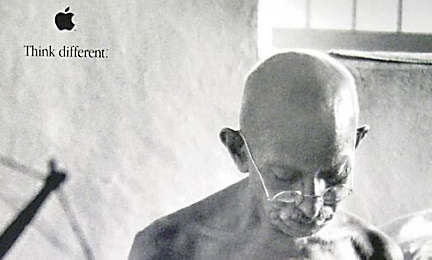 Apple’s “Think Different” campaign looks to me as a master piece of advertisement. But, after some years, I start to realize now that thinking is of course the first good step – and thinking differently, in similar directions that the people they chose for their campaign – but acting in consequence is THE must.

So : let’s stop to only “think different”, and start also to “act different”. Or just a bit, to start with.

I chose the illustration with Gandhi, as I just finished to read one of Tolstoï’s book, which inspired Gandhi.